Each element plays a crucial role to the development of our skills and none of them can be neglected in the course of your training.

Kihon
Kihon (basic) is the practice of fundamental techniques : blocking, punching, striking, and kicking. These techniques are the beginning and end of karate -- a Karateka ( karate student ) may learn them in a matter of months, yet not master them ever. Hence, basic techniques demand regular practice, applied with as much concentration and effort as possible. Kihon should be practised remembering the following ( the late Sensei Masatoshi Nakayama ) form. Balance and stability are necessary to basic techniques. Kicking ( in which one leg supports the entire body ) is an example of technique that depends on the Karateka's sense of balance. Karate movements involve shifting the body's centre of gravity, which demands good balance and control of the body. In addition, the Karateka requires stable joints, stances, and posture to deliver (or withstand) maximum impact in (or from) a blow.

Power and Speed
Karate would be meaningless without Kime. This is the ability to concentrate the greatest amount of force at the point of attack ( or block ). Those with great muscular strength do not excel at karate unless they never learn to use their muscles to the greatest effect.

The Karateka, who excels, does so by maximising his muscular power through Kime. In addition, the Karateka's power is directly related to the speed of his techniques. Note however that speed is ineffective without proper control, concentration and relaxation of power.

The Karateka cannot generate maximum power if his punches rely on the arm's muscles alone, or his kicks on the leg's muscles alone. The greatest level of power comes from concentrating all of the Karateka's strength, from every part of the body, on the target. In addition, the Karateka must generate power efficiently, using power when and where it is needed. Maximum power is required only at the point of impact. Until then, the Karateka should stay relaxed and avoid generating unnecessary power. By tensing the wrong parts of the body or tensing at the wrong time, the Karateka only diminishes the amount of power that goes into his block or attack. While he is relaxed, the Karateka should stay mentally alert. Strengthening muscle power, the Karateka must not only understand the principles of Kihon, he must give them effect with strong, elastic muscles. Strong muscles demand constant, earnest training. They also require the Karateka to know which muscles to use in his techniques : well-trained muscles will lead to strong and effective karate.

Hips
he hips are a crucial, yet an often neglected component in executing karate techniques. Hip rotation adds power to the upper body, and is thus essential to strong blocks and punches. The hips' proximity to the body's centre of gravity makes them the foundation of strong, stable movements, good balance, and proper form. The Karateka cannot move as smoothly, quickly, or powerfully if the hips are passive. For this reason, teachers often remind their students to "block with your hips," "punch with your hips," and "kick from your hips.

Breathing
The Karateka should coordinate breathing with his techniques. Breathing enhances the Karateka's ability to relax and concentrate maximum power in his techniques. Correct breathing, fully exhaling when finishing a strike, for example, is necessary to developing Kime. The Karateka should not breathe in a uniform manner; his breathing should change with the situation. Proper inhaling fills the lungs completely. Proper exhaling leaves the lungs about 20 percent full while exhaling completely makes the body limp, leaving the Karateka vulnerable to even a weak attack. 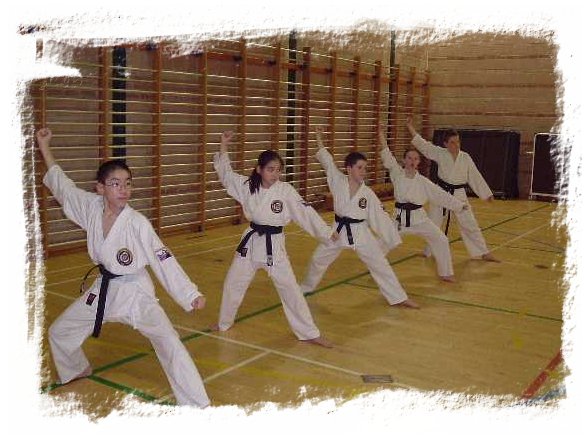 Kata is a collection of formal exercises. These combine basic karate techniques of blocking, punching, striking, and kicking, into a series of predetermined movements. Kata combines offensive and defensive techniques, proper body movement and changes in direction. Kata teaches the Karateka to dispose of numerous attackers from at least four directions. Although Kata does not involve visible opponents, the Karateka, through serious study of the Kata, learns the art of self-defence and the ability to calmly and efficiently deal with dangerous situations. For these reasons, the Kata has been the core of karate training since ancient times. According to Sensei Masatoshi Nakayama, there are five characteristics of Kata : - 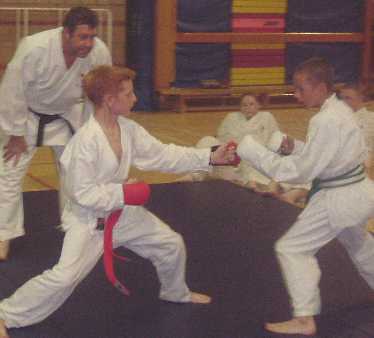 In Kata, one learns basic techniques. In Kumite, one applies them with a sparring partner. The principles of Kihon ( see above ) still apply to Kumite. The Karateka must apply proper karate techniques, demonstrate correct power and speed and above all, exercise good control - contact is prohibited. One must remember that, while Kumite is a useful application of the fundamentals learned through Kata, it is not a substitute for Kata. There are three types of Kumite : Basic Kumite, Ippon ( one-step ) Kumite, and Jiyu ( free ) Kumite.

Basic Kumite
Consisting of three step sparring, it is a useful introduction to sparring for beginner students.

Jiyu Kumite
The techniques are not prearranged. The Karateka may freely engage his physical and mental powers, but must strictly control his attacks - contact is prohibited. The Karateka must be well trained and disciplined enough to make a powerful blow that stops just before it reaches its target. For these reasons, only advanced students may practice Jiyu Kumite. Most Karateka learn Jiyu Ippon Kumite ( a combination of one-step and free sparring ) as brown belts. In this semi-free form of sparring, both sides must use basic, prearranged techniques but may act according to their own rhythm and timing. Jiyu Ippon Kumite often serves as a bridge between Ippon and Jiyu Kumite.